Adena Schutzberg of Directions Magazine delivered the closing plenary of the Mid-America GIS Consortium (MAGIC) conference. The overarching theme was the changing shape of the GIS user pyramid which 20 years ago had a thin top containing the power desktop users and a large base with the end users benefiting from that work. The users at the top created GIS applications that had a societal impact (cleaning up oil spills). The pyramid shifted with the first online GIS applications, like MapQuest, which focused on the needs of individuals (getting from point A to point B).

The most recent shift occurred with location-based social-networking applications, in particular Gowalla and Foursquare. As originally designed, these applications were made to benefit an individual. But the vast logs of location-based data have proved to be fertile soil for many developments with societal benefits that were not part of the original design. She urged the participants to become aware of the power of social networks and be aware of new conflicts, such as the data wars over neighborhood labels.

During the Q&A, the main topics were privacy concerns and the generational gap between those under 20 who don’t seem to care about ‘Big Brother’ (sites like PleaseRobMe), and those over 20 who are more suspicious of being tracked. 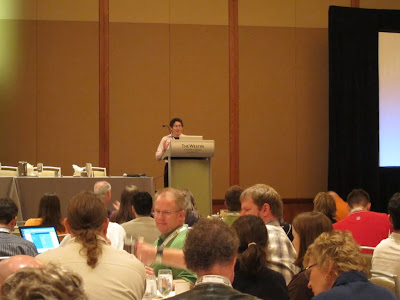